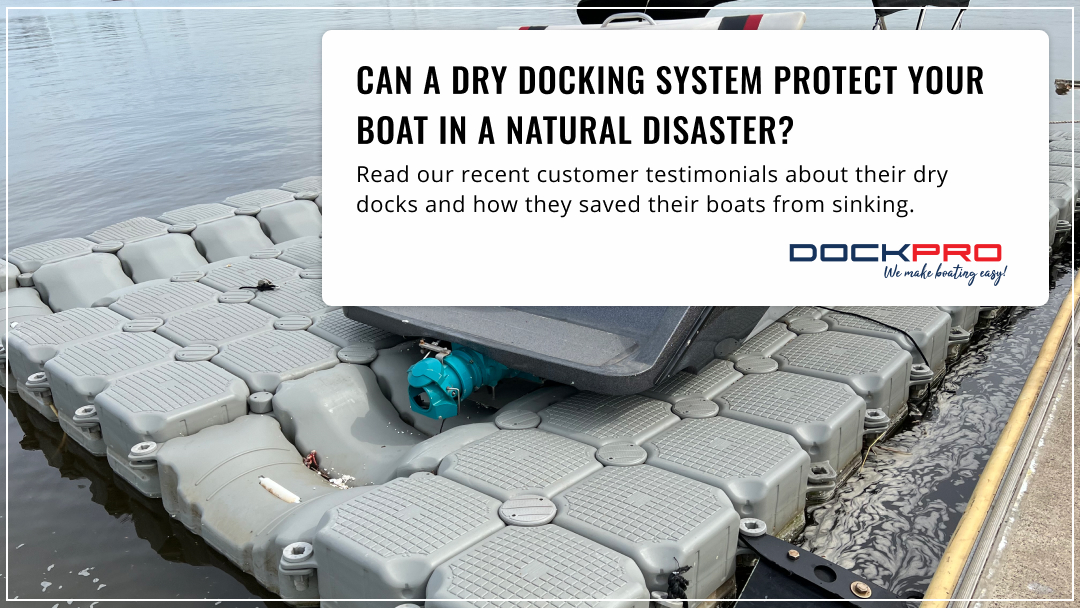 Can a dry docking system protect your boat in a natural disaster?

It has been just over a month since Southeast Queensland and Northern NSW suffered from severe thunderstorms and catastrophic floods.

The Bureau of Meteorology said that in 24 hours, approx. 250-350 mm of rain fell, prompting flash flooding in the region.

The Queensland floods left sheer devastation in their wake. The Brisbane River is still too dangerous for recreational users, with large amounts of debris still being located and retrieved above and below the surface.

At DOCKPRO, we all watched as residents scrambled to save their loved ones, family pets, homes and even their boats, with some boat owners watching their vessels become unmoored and drift down the swollen Brisbane River as deadly storms and floods hit southeast Queensland.

Even as I write this, we are being hit again with unrelenting heavy rain falling upon saturated ground causing flash flooding and more turmoil.

“We’re up to about 1,100 tonnes of material cleared off the river surface, but we’re finding a lot on the bottom. We’ve had 160 unknown objects from Hamilton Reach down towards the Port,” he said.

“A lot of stuff is still to come out of the river yet. Some are harder than others. Getting it all off the bottom is quite a task.”

We live and breathe boating at DOCKPRO and are passionate about providing boat protection. So you can imagine our sheer delight when a client contacted us with this story and accompanying images about their experience with the rising floodwaters.

Living in a home fronting the Brisbane River, Rod has us install a FloatBricks floating pontoon a few years ago for his speedboat, with additional capacity for a jet ski.  He commented at the time that “The process was seamless, and the FloatBricks dock kept my boat safe and dry.”

However, fast forward to February 2022, and the natural disaster of the heavens unleashing, Rod witnesses most of the pontoons and pylons in his area being decimated.

Despite his FloatBricks pontoon breaking free, the dock floated down the river and was subsequently located and salvaged with minor damage to it or the vessel.  However, hundreds of conventional pontoons were affected, and nearly all were damaged beyond repair, with their polystyrene internals having a terrible environmental impact.

In contrast, the FloatBricks not only survived but it sustained very little damage that was easily repairable.

We sprang into action and sent our team, including one of our technical support members, up to Brisbane to facilitate the safe removal of the boat from the pontoon to avoid further damage.

Whilst there is some luck in this story, Rod believes that the FloatBricks dock protected his boat, saving him from a costly repair or potential premium increases with his boat insurance.

Rod said it perfectly “That’s financially and emotionally a damn good thing. I cannot commend the product and service from the DOCKPRO leaders and staff highly enough.  They have performed brilliantly in a crisis and ultimately preserved something, ensuring I will continue to have lots of fun with my family.”

Fortunately, Rod’s story is not a stand-alone case. Another client had their Sunstream Floatlift wash down the Brisbane river, sustaining minor to no damage. While in New Zealand in 2021, when the devastating Tsunami hit, two clients who owned boats in the Tutakaka Marina had their boats saved by being in SeaPens.

They watched as boats all around sank to the bottom while their boats sustained minimal superficial damage protected by the SeaPens which did their job protecting their prized possessions.

It can be hard to find the positives in a natural disaster as we watch others suffer unimaginable losses. But it is important to rejoice where we can, to find the strength needed to rebuild.

Our hearts go out to all the residents affected by the recent Queensland Floods and continuing destruction in Northern NSW.

Don’t Miss out on our latest news